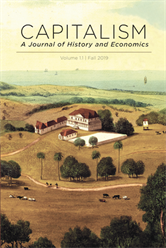 It was the Irish playwright George Bernard Shaw who perhaps said it best: “The moment we want to believe something, we suddenly see all the arguments for it, and become blind to the arguments against it.” In this idyllic image of a nineteenth-century plantation (Cardiff Hall from James Hakewill, Picturesque Tour of the Island of Jamaica, 1825), we see the verdant outlines of a bucolic dream, where pleasure and proﬁ t appeared to walk placidly, hand in hand. Nowhere, the sight of bondage. Nowhere, the perturbing human face on what was deemed mere “property.” Nowhere, the horrors of the middle passage. As it is with the sources of revenue, so it is with a wider variety of epistemological gardens that we cultivate simply for the purpose of shielding our eyes from that which disturbs us. This ﬁ rst issue of Capitalism seeks to illuminate how ways of seeing or not seeing have been integral to the historical (and ongoing) distribution of power, plenty, and poverty. - Carolyn N. Biltoft

A NEW ECONOMIC HISTORY is emerging. It needs a new journal. Capitalism: A Journal of History and Economics finds its roots in the resurgence of interest for the economic past that has been a characteristic feature of recent years, accelerating after the outbreak of the global financial crisis in 2008. The crisis, and the recession that ensued, brought to the forefront the centrality of the capitalist economy as a powerful historical factor. Popular and intellectual perceptions of the instability of the capitalist economy and of the inherent inequality which it may breed, not to mention the corollary of political and social problems that accompanied the subprime crisis, reopened old and important debates. Entrenched assumptions pertaining to the efficiency of the capitalist system came under scrutiny. This perception transcends the value judgment on the system under discussion and, transcending as well political cleavages, history has been called to make sense of the times. At the onset of the crisis, the "precedent" of the interwar economic crisis became the template against which new events were read, and central banks were asked to make sure there would be no repetition of the interwar disasters. The conversation is far from over and it has already succeeded in inspiring the formation of a new school of thought in American history, known as the "New History of Capitalism."

THE YEAR 2019 MARKS a milestone in the history of finance and of capitalism: the three hundredth anniversary of John Law's spectacular take-over of France's economy. Between December 1718 and December 1719, Law established the first national bank in French history, the Banque Royale or Royal Bank, as well as Paris' original stock exchange, on the rue Quincampoix. At the same time, Philippe d'Orléans, the Regent governing France during Louis XV's minority, fused several older trading companies in order to create a giant conglomerate known as the Indies Company that enjoyed an absolute monopoly over the country's overseas trade. The Regent gave Law control first over the newly powerful Indies Company, then over the Royal Mint, and in the end over the regulation of all government finance and expenditure. Finally, also in 1719, Law introduced the French to two financial instruments with which they had had no prior experience: paper money and publicly traded stock in the form of shares in the new Indies Company. One man controlled the most important economy in Europe.

THE TRADITIONAL WAY of starting an essay on the history of capitalism is by not defining the term. The practice is regrettable, since it elides multiple definitions of which two most obviously stand out. For Karl Marx, the essence of capitalism was the separation of labor from the means of production, the concentration of the latter in the hands of the capitalist class, and the development of a political superstructure to secure property rights.2 For Milton Friedman, who positioned himself as the Marxist's mid-twentieth-century bête noire, capitalism was synonymous with markets and their association with private property and voluntary exchange.3 The Marxian portrait lends itself to a characterization of the economic system as unequal, exploitative, and unstable, whether due to a falling rate of profit or, in its twenty-first-century variant, an ever-increasing concentration of wealth and power in the hands of the 1 percent. Friedman and his followers, on the other hand, see unregulated market exchange as expressing freedom of choice, as a vehicle of opportunity and self-improvement, and as a mechanism for competing away inefficiencies.

IN EARLY 1771, Nathaniel Phillips Esq., a young Jamaican planter, received a letter from a Jamaican friend who had just returned to London. The ecstatic John Gray, although he "… wished for the warmth of Jamaica …," described the delights of England, especially the various kinds of berries, and also did not lack for words of praise of the women; they were "… the finest women in general and the best complexions. …"1 Phillips' laconic reply was telling: "Every convenience now in England I make no doubt offered itself to plenty moneys without this blessing poor Jamaica has the preference."2

INEQUALITY—IN INCOME, wealth, opportunity, consumption, health, security, political voice, and environment—presents the most pressing social challenge of our day. And it counts among the hottest areas of research in the social sciences.2 Capitalism may tend towards inequality, [End Page 92] as economist Thomas Piketty's exhaustive account suggests.3 Even so, the historical record makes it plain that public and private policies shape distributions of income, wealth, and wellbeing.

This article examines the history of one particular policy that has contributed substantially to the concentration of income and wealth among the richest households—almost entirely white—in the United States: the preferential tax rate for capital gains. Since 1922, the IRS has allowed taxpayers to keep a greater portion of the gains they make from investments (so-called capital gains) than they keep from their wages and salaries (so-called earned, or ordinary, income). This is because capital gains are taxed at lower tax rate than the same amount of money is taxed when it is earned as salary or wage income (figure 1).4

THIS ARTICLE REVISITS an early episode from the life of Moses Montefiore (1784–1885). Montefiore is a prominent figure in Jewish history, well known to historians for having been an influential leader of Anglo-Jewish humanitarianism and famous beyond the historical profession for his promotion of Jewish settlements in the Levant and for the role he played in the long chain of events that resulted in the creation of the State of Israel. Before this career unfolded, however, he was a member of the London Stock Exchange and, at a time when he was an unknown broker only 23 years of age, he briefly captured the limelight by falling victim to a stock exchange swindle committed on August 20, 1806, by one of his clients, Joseph Elkin Daniels. The historical question with which I engage in this article concerns the extent to which the so-called "Daniels fraud" is important to understanding Montefiore's subsequent career and notably his later interventions in humanitarianism and imperialism. This article answers positively and, in so doing, it revisits—through the prism of a swindle and its financial and cultural consequences—existing stories of Montefiore, of the London Stock Exchange, of British humanitarianism, and of British imperialism writ large.

THE CORNER OF REVIEW ESSAYS

Against Scholarly Enclosures: Reconsidering the Art and Economics of Review
Carolyn N. Biltoft

WHEN THE AMERICAN RHETORICIAN, poet, and literary critic Kenneth Burke assigned himself the task of deconstructing the English language edition of Adolph Hitler's My Battle, he opened with the burdens and importance of textual analysis: "The appearance of Mein Kampf in unexpurgated translation has called forth too many vandalistic comments." It may seem strange that Burke would object to assaults on such an odious text—one that he himself described as nauseating. However, he had his reasons: "I maintain that it is thoroughly vandalistic for the reviewer to content himself with the mere inflicting of a few symbolic wounds upon this book and its author." Burke stood on the inference that open societies require a strict commitment to intellectual rigor as a safeguard for that most precious right to dissent. He warned against the political dangers of allowing debate to devolve into mere contests of mutual defamation. After all, in Burke's words, "[t]here are other ways of burning books than on the pyre."1 Even faced with the text's clear toxicity, Burke asserted that Hitler had been "helpful enough to put his cards face up on the table, that we might examine his hands. Let us, then, for God's sake, examine them."2 Burke argued that truly questioning the book's credibility required the patience of "the close reading."

AMASSING A MOUNTAIN of etymological conjectures and anthropological reports that ranged from Iroquois family structures to the communal land ownership of archaic Russian villages, in the last years of his life Karl Marx concluded that Charles Fourier had been right. The modern family, Marx explained in his ethnological notebooks from the early 1880s, "contains in itself in miniature all the antagonisms that later develop widely in society and its state."1 Indeed, the patriarchal family itself had developed historically on the back of slavery. "In its primary meaning," Marx excerpted from the American anthropologist Lewis Henry Morgan's Ancient Society (1877), "family had no relation to the married pair or their children, but to the body of slaves and servants." Just as Fourier had argued, the status of civilization was mirrored by its family structures and the rise of capitalism had gone hand in hand with a patriarchal revolution against matriarchy and common ownership. This meant inversely, as Fourier concluded, that the surest and most rapid path to social progress was the march of women toward their liberty.